Textiles enjoy a physical intimacy with our bodies because of their proximity to our skin. In addition to this the production of textiles, particularly when undertaken by hand, is incredibly time consuming. As a result of the time invested in the creation of woven textiles and the intimate associations we have with their materials, textiles often feel as though they are imbued with something more than the technical accomplishments of their creation. The combination of their making and use can make textiles emotionally charged and artists take the emotional associations we have with textiles as a starting point for recording intimate and personal feelings within the woven structure. Often, these emotions are suggested rather than spoken. The results are visually powerful, but bear messages that remain open to interpretation.

The late French artist Louise Bourgeois lived much of her life in America and created some of her most powerful work towards the end of her career when she returned to the materials of her troubled childhood and began creating sculptures in cloth. Bourgeois’ family history has been well documented by the artist and represents a mixture of fact and fiction, stories that explain and at the same time contradict the complex emotions she articulates through her work. What can be agreed is that the artist’s family ran a tapestry restoration business in France at the turn of the twentieth century. Woven textiles, their unravelling and repair were a regular sight during her childhood. Bourgeois reveals that her father’s affair with the woman meant to be her childhood governess left her with feelings of betrayal and grief. Her father’s blatancy and her mother’s seeming acceptance of the situation are referred to in her writings, drawings and sculptures. Throughout much of her career in New York City, Bourgeois tackled the ‘serious’ materials of an artist of her generation: metal and stone were used to create large scale, permanent sculptures such as her well known series of Spiders which she likens to the maternal figure. But in the final decades of her life, the textile made an increasing appearance in smaller scale works and it is these works that critics have observed to be some of the most moving of her career.

Bourgeois did not weave, but her familiarity with the repair of woven cloth seems to have provided her with a disarming sensitivity for the power of weaving and stitching to convey emotion. The late Rozsika Parker, in her introduction to the second edition of The Subversive Stitch published in 2010 writes Bourgeois’ “work with fabric is associated directly with female sexuality, the unconscious and the body. Familiar with psychoanalysis, she explores the infantile roots of female sexuality in the family through her own history, which was closely tied to textiles, as her parents ran a tapestry restoration business . . . Particularly powerful are her recent fabric heads. Taking the template of the portrait bust in stone or bronze, Louise Bourgeois reworks the form in patched-together fabric: tapestry, towelling, ticking or pink bandages. The medium of personal life well conveys internal conflict, age, pain and doubt.” 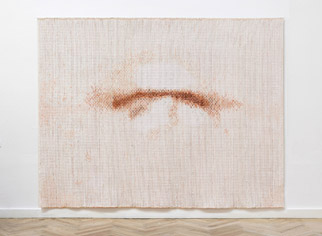 “My pictures are, in a sense, like my skin – an expression of something vulnerable,” explains the Danish tapestry artist Ane Henriksen. Henriksen weaves massive abstract tapestries. “I try to contain the world around me and transform it to fit my reality – to a new kind of internal logic, a stillness.” Like Bourgeois, the emotional power of Henriksen’s work often suggests an unsettling mixture of emotions. She describes her work as, “repulsive yet appealing – aesthetics on the threshold of pain – searching with a mixture of doubt and conviction.” In the “Trembling” series, woven with flesh tones in 2005, a shape like a mouth is centred in the middle of each large work in the three-piece series. This central abstract shape is crimson – a little like the colour of dried pain – suggesting an injury or wound that may be under repair.

Viewed closely, the weft of each tapestry is comprised of numerous colours and textures: cut strips of old bedclothes in various shades of pink, thin sewing threads and fat strips of fabric once belonging to a quilt all pack down into a single pick. Peer even closer into a pick and single threads of bright green, yellow and orange can be found buried deep. The odd worn, fabric covered button can even be spotted. Jette Hartvig refers to these buttons as “little stowaways” and explains, “At one time, they were painstakingly sewn into the fabric of the quilt, which was then cut into pieces and recycled . . . they turn up here and there and tell, almost like a Hans Christian Andersen fairy tale, about their past as buttons and about their new found and important significance as messengers.” The buttons here are no longer functional, their buttonholes long squashed closed and hidden elsewhere in the tapestry, but their presence reminds us that cloth can have many lives and bare witness to many events.

In moments of extreme emotion spoken and written language often fails us, frequently doing no better than offering up tired clichés. And then there are some experiences that even when shared, simply refuse to sit within the logic and order language imposes. Louise Mazanti observes of Henriksen’s work, “We are getting in around behind language’s conventional thinking and thereby behind the intellectual and thought-related repartees that ordinarily enable us to distance ourselves from life’s deeper layers.” Mazanti feels the messy, unsanctioned emotions of discomfort, as well as the marvel, that Henriksen’s tapestries capture. Emotions that are not fun to feel or even possible to explain. But Henriksen confronts them nonetheless. “With emotion bearing threads, I want to form a space, and the possibility of escape,” she explains. “I do not try to distract the viewer’s attention, but to call them to attention – and perhaps awaken them to wonder.”