Our Body the World´s Body

Louise Mazanti 2011 - mag.art. in arthistory. Translated by Dan A Marmorstein

After the divorce, there’s nothing left. Only this body and this room. Existence cut to the bone: this body and this room. Nothing else. A profound sense of pain in the wake of having lost everything that lies outside this completely immediate horizon of experience. The naked person, in the truly literal sense of the word, stripped of all habits and acquired experiences, of all confidence and recognisability. A course of life that suddenly changes tack and the pain that follows as a result.

And even so. Somebody’s watching this scene. Translating the pain, bit by bit, into lessons now learned and concomitantly establishing the distance that is the prerequisite for healing. At the outset, in an almost matter-of-fact registration of the physical surroundings – this body and this room – and, further along the way, in a greater distancing from – and in an augmented attitude of reflection on – the experience of loss. In her exhibition, “Lady Sings the Blues”, Ane Henriksen is building a bridge between personally endured pain and what has been learned from an existential and universally human experience. Throughout the process, she has been driven by a determination to consider this configuration as it is, on its own terms, and give expression to it. Her ability to peel away everything that is superfluous and remain standing, excoriated, is a great strength inasmuch as she comes to establish contact with life’s deepest layers and can then carry the ex-perience further. In this way, the exhibition can be regarded as a kind of travelogue from the greatest journey of them all: the trip home, in all its stages of solitude, doubt, hope, and redemption. Existence’s drama, where laughter and sorrow are closely bound up with each other.

Gender and skin are recurring themes in Henriksen’s works. It is directly on the skin that life’s occurrences are inscribed. The skin is like a membrane that registers people’s meetings with the world: it is the innermost layer, when all outer layers have disappeared. Gender, on the other hand, is the lens through which life’s lessons are learned. In the divorce, gender has lost its antipole and it is through gender that the pain is sensed. This state of affairs is made evident in Henriksen’s first graphic works from 2002, which combine photography and drawing. The works have a sketch-like character – they have been rendered in pencil or charcoal on prints – that throws their personal and procedural nature into relief. At the same time, the profiled wooden frames lead the mind toward the private space of a young girl’s room and serve to further accentuate the sense of intimacy that characterizes the works. The beginning is this total capitulation to the loss. What remains are only this body and this room. The female sex turns up everywhere: in the sink, on the ceiling and in the plants. Everything is coloured by this existential nakedness. The self-centring ring is extreme: it is the only thing that exists – physical reality has been carried all the way out to the outermost edge. 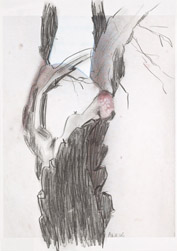 The references to the 1970s feminist art are explicit in the almost raw brutality. However, rather than being gender-political manifestos, these works have much more to do with an existential pain as seen through one gender. In this way, the exhibition distinguishes itself as a hard earned universally human experience that has no “opponent”. It has to do with what we are most afraid of: the fundamental existential dread of losing ourselves and getting lost in the world. It is this journey that Ane Henriksen has set out on. It is these experiences that she is passing on: a quest for being rooted that calls for the genuine courage to face up to one’s own situation with an unsentimental point of view. Ane Henriksen dares to do so and holds fast to this quest, albeit not without a dash of humour that runs as an underlying thread throughout her works, no matter how hopeless the situation might appear to be. “Self-Centring” (2006) is a fine example: a work where she stands by – and simultaneously takes up a distance from – the introspective process, with an abrasive self-irony.

“Household Altar” (2006) demonstrates how deep the process is: it is alongside the very meaning of life that a question mark is being placed. The sense of longing is intense: adoration, sublimation, the earth’s mighty forces, and the pain. A spiritual quest for meaning is being fused with the longing for a man. What is it exactly that mankind is looking for? Merging together with another person? Is this what the spi-ritual quest is all about? To merge together and become one? Is it the earthly or the divine forces that are attracting us… and is there really a difference between them? Where can any anchoring and a fixed point in life be found? 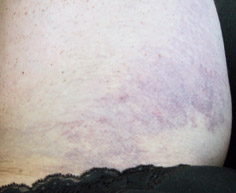 A trip to Iceland leaves its mark. Paying close attention to the very intimate sensory impressions, “My Icelandic Flower - Raw” (2003) becomes an exploration of pain’s aesthetic potentials, after taking an unaccustomed trip on horseback. Here, the scaling has become an artistic effect in itself, and pain’s intimate character is laid bare as being common to everybody and as being visually insistent. The monumental weaving has been produced from bed linen cut into strips.

With this, the references to the body and to the intimacy that envelops it are reinforced. It is not merely as an image that the work communicates. By sheer virtue of its physical materiality, the intimate sphere’s vulnerability is laid bare. Consequently, the work stands, in its most unadulterated form, in the cross field between the personal and the general – between the I’s story and the universal human experience. My body – our body – becomes the world’s body. The body is merging with the landscape, as can be seen in the three works bearing the identical title, “Trembling” (2005). Landscape, body, interior space and exterior space are sensed, registered and woven together from bed linen in an expression of vulne-rability and intimacy which, in any event, simultaneously exposes all the power there is in standing so existentially naked. In these works, what really becomes clear is how a painful developmental process opens up the senses for entirely different levels of existence: for the fine registrations of the connection between body and landscape, between human being and world and for emotional states that can only be described in pictures. It is the existential depth that is being experienced and rendered figurative: the experience of being human that lies beyond language’s reach.

Such a thorough and continuous process of change naturally entails a question about identity. “Sampler - Bottom Line” (2008) and "Coming Up - Mille Fleur" (2008) are both works that are scanning, on many levels, for clues. The sampler’s symbolic world veers all the way back to the young girl’s bedroom’s rummaging to manifest an identity through various patterns and symbols. The sampler (i.e. a piece of cloth embroidered with various stitches, serving to show a beginner's skill in needlework) traditionally functioned as a specific exercise preparing the aspirant for mastery of various kinds of craftsmanship techniques and concomitantly was a schooling in the demands posed by adult life. In Henriksen’s rendition, the sampler becomes a tool for taking stock and signalling the end of a closed chapter. In “Coming Up - Mille Fleur", what becomes clear is how the process has opened up for something new. Here the perspective is looking ahead, in a kind of future vision that, on the one hand, is deeply rooted in traditional weaving patterns and symbols but, on the other, makes use of this professional identity in order to sketch out the emergence of entirely new possibilities.

The situation is not without humour. In the exhibition’s central work, “A Swaddling Room” (2010-11), the mature woman’s experience comes to be manifested, replete with the humorous distance that characterizes the process’s conclusion. All the questing, all the longing, all the self-centred pain and all the bodily sensing that have characterized the process of loss have now become transformed into both affectionate self-irony and societal reflection. The man’s hairy chest is being lionized here as a quasi-religious icon, as a sacramental picture of sublimated longing that affectionately treats of the modern woman’s existential and spiritual quest. Presence, merging, surrender, and reconciliation: is the woman's quest oriented toward this world or toward what lies beyond? Are we looking for ourselves, for security, for sex or for God? And is there any difference, after all? With the porcelain platters’ loving-pain song titles that play on, self-indulgently, in circles, Ane Henriksen is suggesting that self-centeredness always has to do with the relation to others. And accordingly, that the release from this is to get out there and meet the world, which is certainly painful but also sincerely tempting at one and the same time.

The activity of passing on hard-earned experience in images connotes that Ane Henriksen is communicating with the viewer on the same sensuous and experiential level from where learning and mastery themselves sprout forth. We are getting in around behind language’s conventional thinking and thereby behind the intellectual and thought-related repartees that ordinarily enable us to distance ourselves from life’s deeper layers. By giving the pain a powerful visual expression, this exhibition quite directly gives voice to an otherwise language-less and universally human experience.