Jette Hartvig 2011 - weaver and BA in arthistory. Translated by Dan A Marmorstein

A mouth is open like some big, dark hole in the middle of a luminous and shimmering surface. Is it a scream, a sigh, or a bated breath? Is it in pain or is it undergoing pleasure? The story unfolded here states nothing more about this, in the manner Ane Henriksen tells it with her picture, Trembling 3. For there is no face to tell the story. There is only the mouth. And it’s not talking. It’s listening. Like a seismograph, it is registering all the vibrations around itself, from the largest aftershocks – that can knock over everything in one person's life – to the slightest variation in the woven structure that it itself is part of. 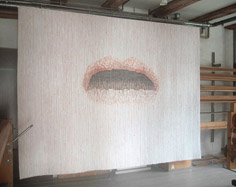 Trembling 3 is a woven picture. If you asked Ane herself, it’s possible that she wouldn’t claim it was anything more than a large woven sketch. But then, you might object, it certainly appears to be finished! And if there are any pictures that have a definitive conclusion, it is the woven ones. When the last thread has been woven in and the whole picture has been clipped off from its connection to the loom, there’s no way forward and there’s no way back. However, if we regard Ane’s pictures as sketches of something and not as sketches for something, her modest reserve makes sense, for all that, and points quite precisely to what it is that is so special about her work.

Textiles have their place in contemporary art, although this niche is representative of something a little altmodisch: a practical, cultural phenomenon linked to homey domestic cosiness, to household duties, to childhood, and often presented with what is simultaneously an impressed and ironic distance to the artisanship. The connection to textile as a bearer of cultural and especially of female values is also central in Ane Henriksen’s work. The titles alone, with words like “sampler” and ”mille fleur”, testify to this. But there is no distance taken up here, neither to tradition and cultural history nor to the sensual and intimate, which are necessarily linked up to what we have closest to our bodies. If we zoom in a bit closer and examine one of her weavings, titled Recall, all the way down to what could be called its bearing structure, emerging among strips of fabric and coloured threads, we find that the connection leading back to the tradition is fully intact; this connection is held in place by something as ordinary as buttons. At one time, they were painstakingly sewn into the fabric of the quilt, which was then cut into pieces and recycled. Like little stowaways, they turn up here and there and tell, almost like in a Hans Christian Andersen fairytale, about their past as buttons and about their new-found and important significance as messengers. The textiles are spacious and loose-fitting, not only because you can wrap them around yourself but also because they take time to execute and because they are suitable for preserving and concealing memories, in any event, when there’s a matter of handicraft involved. How much apprehension about the future has not been woven into the old tickings and how many expectations have not been scrupulously trimmed with every stitch and laid into an embroidered sampler. This amalgamation of craftsmanship, time, and solicitude was once endowed with the name “handicraft”. This is a term that has been cast aside and has lain buried under layers of dust, but which, with Ane’s pictures, has been blown free from its own stagnation and has been reinstated in the present as a connecting link to the tradition.

Maybe this is what the mouth is doing. With a mild and wry smile, it is blowing away the prejudices that hold that weaving and contemporary figurative imagery cannot possibly have much to do with each other.

In Ane Henriksen’s woven pictures, the weaving enters in as handicraft and process on an equal footing with the weaving as picture. Here, there is no contact anxiety about the past’s dusty virtues and there are no frantic attempts to become a-ligned to present day judgments. What we have here, though, is a reciprocal lift, a kind of symbiosis between weaving and picture. Now, it could be argued that such a symbiosis, technically speaking, applies to all woven pictures. But what is so special about Ane’s pictures is that all this can be seen so clearly. As a matter of fact, this is just what you see, both when you zoom in closely in the details and when to take a step back in order to contemplate the whole scenario. The materials are powerful and visible. In Trembling 3, the warp threads’ horizontal course can be seen quite clearly inside and even in front of the open mouth, as though they might be bars. The lips are pressing up against these bars but they are not forcing their way past them. What we are looking at here is not so much a picture of a mouth as it is a glimpse of something that lies behind the weaving – this is to be understood almost literally. Notwithstanding working drawings, trial runs and everything else that otherwise belongs to the craft when it comes to diligent preparations, Ane’s weavings disclose themselves as actually not being pictures at all. No, as large, flickering PowerPoints, they are rather showing pictures, experimental pictures, in ever-new combinations of memories, expectations, hopes, and wants. They embrace all these. Everything has been woven together in a network of precisely rendered sense perceptions and intrepid registrations. Even where there are unambiguous motives to be found, and, to boot, in a cartoon-like stylization or possessing an autobiographical character, as can be seen in the bordure of Sampler - Bottom Line, they are like visions that have turned up, along the way, while working and then placed in between – and on an equal footing with – the cut swatches of fabric. And there they have remained, hanging together with a cautiously advanced question, spread out on a yellow backdrop: a closed chapter?

The mouth is open. It’s holding its breath, sensing and registering in the manner of a quick sketch, created in a moment of responsiveness: Was that the way it was? Is this how it is?