In the project entitled Business Sky, the often-stereotyped roles of men and women are woven together. Ane Henriksen has combined feminine handicrafts with the masculine business world to create a large picture composed of cast-off shirts.
Under their business suits, men button their up shirts; they cover their chests with pastel colours, light blues, pinks, whites as well as both checks and stripes. Does the uniform of the business fraternity represent the colour of the male within the animal kingdom?
The shirts have been collected from the canteens of the Danish financial services company Nykredit, and the colours relate the story in a large cloud of dreams. The grids and graphs that abound in office life form the framework of the pattern within the construction of the loom. 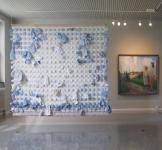 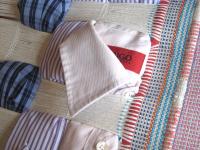 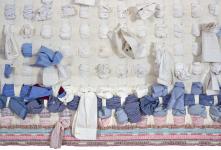